Last week, a giant leap forward in the world of technology occurred. No, Call of Duty: Libya Edition has not been released yet. I'm talking about the Jeopardy exhibition match between IBM's new mega computer, Watson, and former Jeopardy masters Ken Jennings and Brad Rutter. While our carbon-based brothers put up a good fight, ultimately Watson and the programming geniuses at IBM walked away with the 1-million dollar grand prize, which will go to two charities.
What I found interesting was Ken Jennings' dissertation thereafter on Slate.com about his experiences with the IBM Super Computer on Jeopardy. He brought up a word that I find to be extraordinarily important in the world of Search Engine Optimization, and just good writing in general. That word is contextual.
Contextual information is data which unravels the overall or general meaning of a given topic.
So, for instance if you hear the word cheesy, you might think the term is referring to one of my awfully-timed jokes (I pray you are never a victim of my attempt to make you laugh......), until I brought up the term lasagna. Now the word takes on a whole new meaning; you've detected a pattern in the topic and begun to unravel the overall context of the root word or discussion.
In the case of his article on Watson and Jeopardy, Jennings stated that he saw very similar patterns between the ways that Watson unravels and responds to clues and that of his own methods:
That machine zeroes in on key words in a clue, then combs its memory (in Watson's case, a 15-terabyte data bank of human knowledge) for clusters of associations with those words. It rigorously checks the top hits against all the contextual information it can muster: the category name; the kind of answer being sought; the time, place, and gender hinted at in the clue; and so on. And when it feels "sure" enough, it decides to buzz.
Contextualization is soooo important for both humans and machines. It allows both the ability, as Jennings noted in both himself and Watson, the ability to get to that main point, and respond accordingly.

A funny thing to also note above is Jennings' view of how humans and machines think very much alike. Granted, there is a significant speed advantage for the computer, but the point is that if enough time were allotted, both human and machine would arrive at the same conclusion, especially since the machine is patterned after human engrams.
(Human engrams...anybody remember the M-5 from Star Trek? Daystrom? Sorry, cultural reference...)
Watson was a major step forward in the advancement of computers, but it is also a wonderful opportunity to glimpse into the mind of a machine that is geared toward searching for answers. Now, let's take a step back and think about search engines for a moment; are not Google, Yahoo, Bing and other engines geared to do pretty much the same thing? You type something in the search box, and Google will seek out the best possible answers to your query, all in a matter of milliseconds.
So what most people do in order for their site to rank well is to add content, and lots of it. Nothing wrong with that, but the writing is geared toward getting it ranked well by the engine, not developing the proper context of the article for the humans to consume and gain knowedge. This is all wrong, since as we noted above, the computer was developed with the likeness of the human, not the other way around.

I'm not saying this like this is new to all of us, I'm saying it more as a reminder. A lot of times when we are writing for our websites, blogs, social profiles, and other search-engine related material, we are writing with the hopes that the machines will pick up our information and present it to somebody sitting in their suit or pajamas and invite them in. The problem is that we've lost touch with the more important one to write our stuff for ---the actual human being seeking the information. Humans are not looking for a stupid search-engine optimized article with tons of keywords and weird heading tags that don't even seem to make sense, they're looking for a real article on how to solve their real problem.
Stephen Chapman of ZDnet today described an unsavory version of this as "article spinning", where you basically regurgitate an article you find on the web in your own words. The purpose, again, is to placate the search engines, with no regard for the humans that ultimately stumble upon it. It's a really awful practice, and the funny thing is that the net result is that it's not even useful. The humans that ultimately land on such a page won't even stay long enough for the content to matter, anyway.
When you write your content for the web, write as if you're talking one on one with somebody. It takes some knack, I admit. but if you can refine your practice, the most difficult part of adding unique content to your site will be 90% complete. Then go back and edit a little bit, sprinkle a few good keywords in there for the search engines (Maximum 5% keywords range), and adjust the tags of your site accordingly.

Above all, the most important endeavor is to make sure you've gotten the main point of your article across to the user - the context of the writing should be crystal clear, so that when the user moves on to a new topic, the one just observed is completely understood from your point of view.
In conclusion, don't try to think like a computer. You already are one. Since computers are trying to be built like you, there's no need to try to impress it. Rather, think like the human that you are, have an opinion, and welcome the opportunity for others to benefit from it when they visit your blog, website or social profile.
Posted by Unknown at 4:35 PM No comments:

For the last 5 years, I've heard the question "Where's the ROI" used in conjunction with Social Media more often than "Where's the Beef" back in the 1980's.

The problem is that most people try to take platforms like Facebook, Twitter, YouTube and LinkedIn, and use them for some sort of direct Business or Financial gain. But as you've probably seen over the years, that rarely works.
Some have used the platforms as a branding tool. While this certainly has value, if the branding conversation is one-sided (i.e. the business throws a few posts per week at its followers, but doesn't directly respond to reply questions or discussions), then the net result can be a perceived lack of authenticity. This can kill a brand faster than a bad Groupon commercial:

I remember about 5 years ago I was talking with a trusted mentor of mine in the web development community, and I told him that Facebook was going to be a very important platform, and we should develop and integrate our websites in conjunction with it. He responded that he just doesn't see the value of Facebook and other Social Media, and it would be pointless to change anything we are doing, or try to develop any sort of interface that would be useful for our customer base at that time. In a rare divergence of opinion with him, I decided to use the platform to try and better connect with my community - obviously there was a business purpose, but I endeavored to do it in a more authentic, upfront manner than just putting up a post and expecting the world to respond to it. To this day, when I log on, I try more to see what others are doing rather than focus on posting my own things. 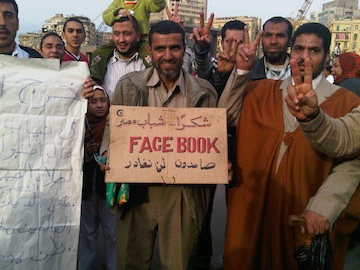 This week we've again seen just how effective Social Media can be as a communication tool. As a result of Facebook and Twitter, Egypt's Hosni Mubarek was removed from power. What happens next is anybody's guess, and hopefully the transition will be as peaceful as can be. But the point has been made, that when people organize around any cause that is near and dear to their hearts, significant change can be the result.
As a businessperson, this may not directly affect you, but you can certainly garner some interesting conclusions on what has happened in Egypt, and how powerful Social Media's influence can be in creating change:
1. If you are not listening to the voice of the people whom you serve, you and your business can become obsolete in short amount of time. Think about it...did we even consider Egypt just a few short weeks ago? Yet on Facebook, Twitter, YouTube etc., people were organizing and discussing issues, and came to the collective conclusion that it was time to change the system.

2. Even people with limited resources are able to connect, organize and ignite change using Facebook. Thus it makes more sense than ever to always keep these powerful voice in mind as you are growing your business.

3. On the Internet, money does not equal power. The will of the people equals power. Thus, you cannot directly attribute ROI to every online endeavor, rather steer your business in the direction of what best serves your audience.

4. Keep tabs on new innovations. My guess is that the Mubarek government had very little idea that such a revolution could occur in just a matter of weeks. When they realized, they tried to shut down the Internet, which backfired. In addition to listening to the voice of the people, it is very important to stay current on the latest technological innovations. Try out a new service each week, just to see if there is any value to it. If there is, it might help you, your business and your client base. (One that I recently became interested in is Convore - check it out)
I often talk about the reverse 80/20 rule, in which 80 percent of your time on Social Media should be spent listening, serving and conversing with others on random things that build connections with your friends and audience. The other 20 percent of the time is used on the ROI-building activities, such as discussing new services, advertising events, and other endeavors that are profitable. While the 80 percent may not bring direct results, it does wonders for you and your business in terms of reputation.
You may not ever have to deal with a revolution as monumental as that of Egypt, but you can certainly be a part of the community that creates positive change. To do this, consider embracing some of the ideas mentioned above. It will change your business, and more importantly...it will change you - in my opinion, for the better.
Posted by Unknown at 10:37 AM 1 comment: