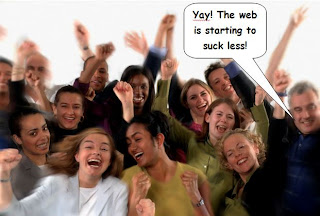 I don't know about you, but if I see one more website with an Arial or a Times New Roman font, I'm going to deeply stick a razor into the biggest vein on my arm.

Not that I don't find them useful. For many years, Arial and Times New Roman were the de facto standards for "web-safe fonts", which is a fancy way of saying that these were fonts
that would show up on pretty much any browser no matter what you're using: Firefox, Safari, Google Chrome, Internet Explorer (or as we call that last one - the scourge of mankind that will not die). You could be in Yemen, on a foreign browser created by a Taliban warlord that just harvested and tested opium poppy seeds, and yup...Arial or Times New Roman!

Then there were a few fallback fonts: there was Verdana, which always sounded like a classier font, but the truth is that it is simply a fatter Arial. So if you ever

read a Verdana font that says "do i look fat??" respond back immediately with a vehement "of course not, sweetie."

Comic Sans: Honestly, my favorite font. I always thought it went well with our cartoon logo. But of course, it is cartoonish. So it might not be the best font for, say...a funeral home. You don't wanna go to find out when your loved one's services are about to transpire at Wally's Wild Water World .com or something. Go bury your loved one and get 15% off the mega water slide.

I'm probably getting a little irreverent at this point so I'll say for the record now;
I apologize if I have offended anyone. But I am pretty stoked about something I just saw on one of our client's blogs, which is a completely new font! You can see it here: www.vacationonyourmind.com. BTW Rockland Web Design can't take credit for that one,

Kathi Handt has a very talented relative that was able to set it up that way in her Blogger account, which unbeknownst to me is a new setting in the system. When I heard about this I checked it out and changed my own blog font.

So a little background just in case you are getting confused why this wasn't able to happen in years past: Every computer (including the one you are on) has a set of fonts installed inside. Then, when that computer goes to a website, the page that shows up tells the computer what font to use to display the text on the page. The problem of course, occurs when a certain font (such as Futura, Gothic or Amazing Grace) is not installed on a computer. Then all that shows up is nothing, or in most cases the backup font. Guess what that is? Yup, Arial or Times. Ugh.

What changed? A seldom-used technique called @font-face. I won't bore you with details, but essentially it makes the font in question hang out on the website, and when somebody goes to the aforementioned website, the pages will temporarily install that font on the computer that is being used. Pretty simple, huh? Unfortunately, few people used it up until now.

But designers are starting to catch on. And when something reaches a critical mass and starts getting used more, it reduces the cost needed to install on a website. This means that now, if you have a website, you can probably have an @font-face setup installed for just a few hours of work from your friendly neighborhood Spiderman (um, web designer). Wallah! Instantly, your website looks a little less vanilla, a little sexier, and more likely to attract people to stick around.

The reason why you want to do this is that it is a very easy way to change your entire website with very little effort. And when you change, update and modify your website often, it is a great way to have your customers coming back for more! Aesthetics definitely count, and if you pay attention to them, you won't end up with yet another customer leaving because he subconsciously got turned off by a fat arial. Rather, he (or she) will stick around - Amazing Grace is on the screen, and it is quite the bedazzling @font-face, one which certainly encourages a few extra clicks over to the shopping cart, contact form, or phone to give a buzz.
Posted by Unknown at 5:41 PM No comments:

The Meaning of Customer Service

You know, for many years I have heard people boast about "customer service" in their business being the thing that sets them apart. And I always thought that something like that should be pretty freaking Captain Obvious. But I'd like to share with you a story that will open your eyes a bit; it certainly has done so for me...

A few weeks ago I dropped into The Chuggin Rhino after work for a well-deserved drink. (They are located on the corner of route 45 and 202 in Pomona, just down the block from the Rockland Boulders Stadium)

I sat down at a table by myself, and the waitress promptly came over to take my order. I ordered my usual Sam Adams draft and a burger that is the size of a small country. (I've had them before at the Chug...they're good.)

Anyway after a few minutes I got kind of restless and wanted to read the newspaper. I asked the waitress if she had one in the back, and she said "Let me go check." A minute later she asked which one I wanted, and I said the Journal News. Then she was gone for about 5 minutes...

When she returned, she gave me what looked like a new newspaper. So I asked her "Did you go out and buy this?" She said yes. I was astounded - later I asked her why she did this, and she said that the owner, John Rodriguez has always emphasized making the customers feel as comfortable as possible. She also said that she knows that some customers don't always feel like talking to other patrons and there is usually a newspaper there. On this day, it seems someone discarded it already, so she went out and got a fresh one for me. (She also joked with a wink that she knows it increases her tip. She was very right and deservedly so!) I thanked her for being so courteous.

A few minutes later, I went outside to make a phone call. When I returned, I noticed that the burger I was eating was gone. Before I could ask questions, a waiter came back with it, put it on the table again, and explained that he put it under a heat lamp to keep it warm, while I was outside making my call!

I'll tell you this: From this experience alone I have recommitted to the practice of giving good customer service for everyone who needs work from Rockland Web Design. For many years, I focused on various elements of building the foundation of the business: marketing, design process, seo, social media, administration, infrastructure, and a whole lot of other things that segment my time. And a lot of it involves numbers, numbers numbers.

But I've come to realize that numbers alone do not make a successful business. Everyone that encounters us has to come away from the experience with that same "wow" that I got at the Chuggin Rhino that day. They should all be smiling like they just got the best...burger of their life!

I won't be following up with a post on how we pride ourselves on customer service. I just hope we simply perform more acts in the future that allow us to continually improve, and be able to smile at our customers when they thank us at the end, responding with a "...no worries, hope to see you again soon."

I hope you do the same in your business. Especially if your business prides itself on customer service.
Posted by Unknown at 2:52 PM 3 comments: